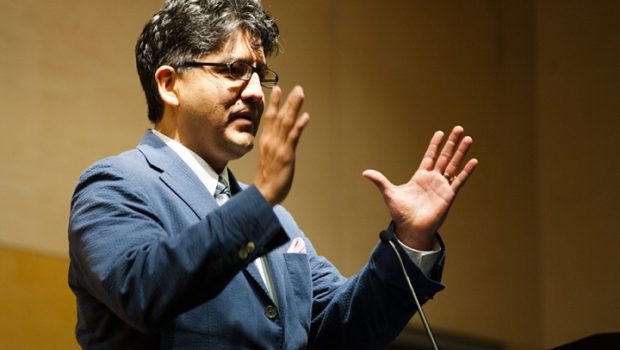 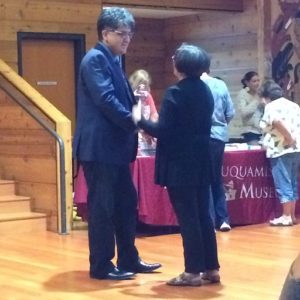 And with that instruction, author Sherman Alexie had a sizable audience of mostly adults on their feet shooting their hands in the air to mimic lightning. During a reading last Saturday of his new children’s book, Thunder Boy Jr., at the Suquamish House of Awakened Culture, Alexie was both the animated reader and stage director. Attendees learned to bark like reservation dogs, pound their feet to make drumming sounds, and burp, all while laughing with Alexie, who somehow commanded the attention of a rapt full house.

Better known for his adult novels such as Ten Little Indians and Reservation Blues, Alexie, a Native American author, poet and filmmaker, has only recently ventured into writing for children. His first foray into the genre, the award-winning young adult novel The Absolutely True Diary of a Part-Time Indian, was based in part on his own experiences growing up. It took him into schools to do readings for students and he was astounded to hear many of them tell him it was the first book they ever read. He wondered if he couldn’t open the reading gateway to younger children by writing a children’s book.

Like most of his writing, the story of Thunder Boy Jr. is taken from Alexie’s own life. A young Native American boy unhappy with his first name imagines life with a different name. The colorful illustrations are by illustrator Yuyi Morales, a Mexican and American illustrator and author who Alexie sought out because he wanted the art to be infused with a sense of deep ethnic understanding. 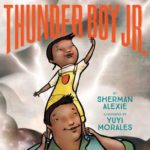 Alexie punctuated his Saturday reading by stopping to point out small details of the illustrations that Morales intentionally included, and he gives her full credit for the collaboration, sharing the book’s royalties with her in a 50-50 split. The success of the book already has Alexie thinking about a sequel that would feature Thunder Boy Junior’s mother and sister, helping children learn that girls can achieve anything.

Alexie lives in south Seattle and is a regular figure on the regional literary circuit. He isn’t afraid to share his thinking on current events, cultural differences and his own history during presentations, and he’s no different when promoting a children’s book. He discussed the current state of tribal disenrollment (which he strongly opposes), shared a funny story about his mother’s funeral and admitted he was shocked to be called by AARP for an interview because he’s turning 50 this year.