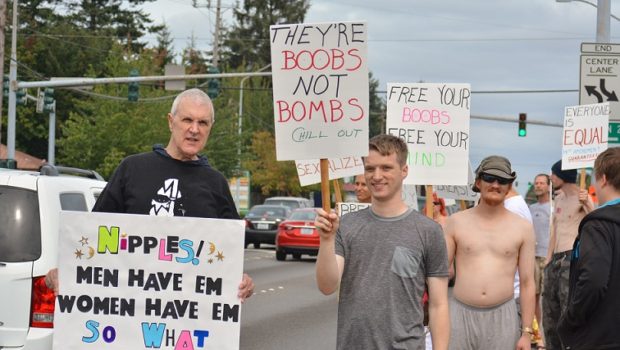 Note: This story is definitely NOT safe for work. Photographs of women’s exposed breasts follow. Continue reading at your own risk. Scroll to the bottom of the story for a photo gallery of Sunday’s Go Topless protest in Bremerton.

Breasts are beautiful. But should women be allowed to expose their breasts in public?

That debate played out in dramatic fashion in Bremerton on Sunday, as a group of protesters and counter-protesters gathered on either side of Wheaton Way near Riddell Road. A man and woman, both topless, wave signs advocating equal topless rights for women at a protest in Bremerton on Sunday. (Steven Wyble / Kitsap Scene)

The original protest advocated “equal topless rights,” allowing women to go topless and bare their breasts in public, just as men are allowed to do. The protest coincided with Go Topless Day, a national event featuring protests all across the country, including in nearby Seattle.

(Go Topless Day is somewhat controversial [even more than it already is] given its ties to the Raelian Movement, which some people characterize as a UFO cult — although the issue of equal topless rights goes beyond one’s belief in UFOs).

Around 1 p.m., the topless-rights crowd was about 20 people strong, including both topless men and women, some wearing pasties, holding signs with slogans like, “Free Your Boobs, Free Your Mind,” “Topless Rights For All or None,” and “Normalize, Don’t Sexualize.”

Meanwhile, the counter-protesters had about seven people on their side of the street, holding signs that said, “Wear Your Dignity; Free Shirts,” and, apparently paraphrasing Donald Trump’s campaign slogan, “Make America Modest Again.”

Carl Wiegand, who organized the topless protest with his wife, Marci Wiegand, said around 1 p.m. that the event was going well. Participants were being respectful, refraining from vulgar or disruptive activities, and there were no arrests, he said, adding that the police even drove by and waved.

Drivers passed by and waved or honked, Marci Wiegand said. She even felt the counter protest was helping their cause; every time the counter-protesters spoke into their loudspeaker, more people came to join the topless protest, she said.

“Breasts are for feeding children. They’re not obscene, they’re not sexual. They are a source of food for our babies.” — Graycie Usher, Topless Protester

“And I’m not the only topless woman out here,” she said, sounding relieved. “I was worried I was going to be.”

Graycie Usher, 26, of Bremerton, said she first heard of the protest after she saw a poster advertising it near the Bremerton ferry terminal.

“It’s just ridiculous that we’re treated differently because our breast tissue is larger than men’s. Everybody has breasts, everybody has nipples. And the fact that we are constantly censored because of our biology, even when in the 14th amendment (to the U.S. Constitution) it says that no one gender, no one sex, can be arrested for something the other gender can’t be (arrested for). I just think there’s something not right about that. It’s hot; we should be able to take our shirts off just like men.”

Usher said her interest in topless rights started out as advocacy for breastfeeding mothers.

“Women are ostracized and harassed viciously for breastfeeding their children in public, when that’s what our breasts are for,” she said. “They are for feeding children. They’re not obscene, they’re not sexual. They are a source of food for our babies.”

“You show off the bodies of show pigs on a farm. Not women.” — Anonymous Counter-protester

Megan McKenzie, 32, of Mason County, said she found out about the event on Facebook. She’s been a women’s rights advocate for 15 years, she said.

“My take is that women still don’t have equal protection under the law,” she said, later adding, “We need women like this to speak out and we all need to stand together.”

Tuan Nguyen, 33, of Bremerton, held a sign reading, “Breasts Are Family Friendly.” He meant it: His wife — Amber Nguyen, 32 — and son, Swayze Nguyen, 1, attended the event as well.

Amber said she breastfed all three of her children, despite her family’s belief that doing so was “disgusting” because it exposed her breasts. But Amber says she believes women have a right to expose their breasts if they choose to do so.

“I’m one of the people who feels like, to each his own,” she said. “And we’re not hurting anybody doing this … Why should men or anybody get upset that we’re going topless? It’s not hurting anyone. I know someone said earlier people were afraid of their kids coming out of Shari’s (restaurant, which was right next to the protest site) and seeing all these women’s breasts, but I feel like as a parent, that’s your problem. You sexualized them, you didn’t explain it to your family or to your children, so now they’re sexualized because of it, because you made it that bad, you made it taboo.” When asked for their names, the counter-protesters, who said they live in Kitsap County, declined to identify themselves. “We don’t want to be affiliated with any church or organization,” one man said. “We think it’s important to get the message across.”

He said he first learned of the event from its flyers.

“They posted some little signs of some kind of an anime girl or something, topless,” he said. “The signs are inappropriate, first of all. So we decided we should come down here. You know, there are Americans who still believe that modesty is important.”

“Look,” said another man. “You show off the bodies of show pigs on a farm. Not women. They deserve more dignity than that.”

The counter-protesters brought free T-shirts they said they wanted to give the topless women.

A woman chimed in that any T-shirts that weren’t given away would be donated to a local homeless shelter.