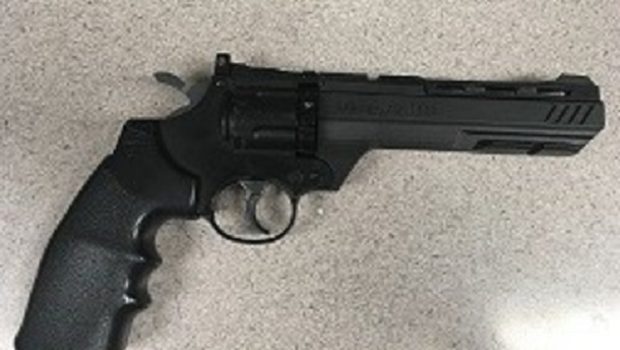 Bremerton officers were dispatched yesterday to a reported “gun violation” on a pedestrian overpass over Highway 3, according to a post on the police department’s Facebook page. Three juveniles were reportedly in possession of a “big black gun” that made loud noise when fired.

Officers made contact with the youths in the Bay Vista area, and one of them turned over a C02 air gun that “looked exactly like a blued .44 or .357 revolver,” according to the post. None of the gun was colored orange — a common safety feature meant to distinguish the fake gun from a real one.

The police department described the fake gun as “very menacing and intimidating.”

“Would likely be called an ‘assault revolver’ by certain media outlets,” the post noted.

After investigating, officers determined the youths were plinking bottles by the steps of the pedestrian bridge. The reporting party reportedly told police the youths shot at the staircase she was walking on.

Police seized the air pistol for evidence of “aiming or discharging firearms” and “reckless endangerment.”

A report was forward to the juvenile prosector, and the youths were released from the scene.

Further investigation revealed that they were plinking bottles by the steps to the pedestrian bridge. The reporting party stated that when she walked by, they shot at the staircase she was using. The air pistol was seized for evidence of aiming or discharging firearms and reckless endangerment and a report was forwarded to the juvenile prosecutor.