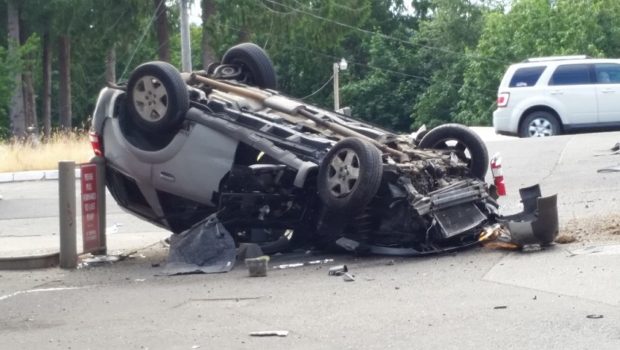 An 11-year-old boy was airlifted to Harborview Medical Center yesterday after he was injured in a rollover car crash on Highway 3 in Belfair. 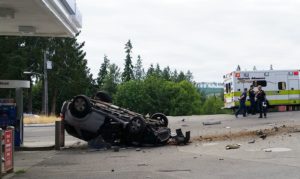 Sheriff’s deputies and medics respond to a rollover accident at a Belfair gas station Sunday evening. (Photo by Kitsap Scene)

The crash occurred at 5:47 p.m. Sunday, according to a Washington State Patrol report.

A 17-year-old Belfair boy was driving a 2005 Saturn Vue southbound on Highway 3. Near milepost 26, the vehicle drifted through the turn lane and crossed the northbound lane, the report states.

The vehicle drove off the road, flipped, and came to rest in the parking lot of Randy’s Short Stop gas station, according to the report.

The driver, who was wearing a seatbelt, was transported to Harrison Hospital in Bremerton.

His passenger, an 11-year-old boy, also from Belfair, was not wearing a seatbelt and was airlifted to Harborview Medical Center in Seattle.

Drugs or alcohol were not involved in the accident, according to the report.

The WSP report lists the cause of the accident as “wheels off roadway.” Pending charges listed in the report are second-degree negligent driving, no valid operators license; and allowing a child under the age of 16 to ride without a safety belt. 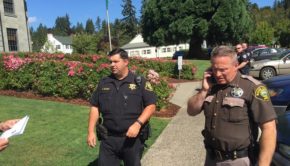 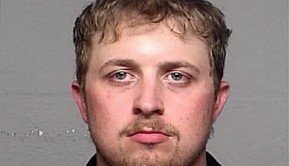 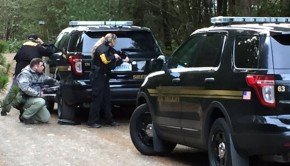