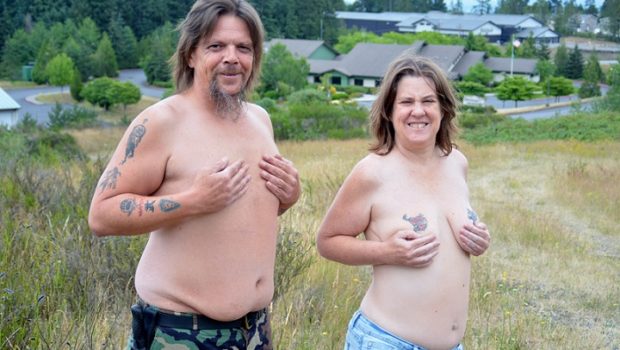 Be prepared to see lots of nipples in Bremerton next month. Female ones.

Bremerton couple Carl and Marci Wiegand are taking to the streets, along with whoever will join them, as part of Go Topless Day, which is just what it sounds like: A national day of protest for people who want to legalize female, above-the-waist nudity in public, just as it’s legal for men.

The protest is scheduled for 11 a.m. to 3 p.m. Sunday, Aug. 28 at Wheaton Way and Riddell Road in Bremerton.

Go Topless Day was started in 2007 by Go Topless, an organization founded in Nevada by Claude Vorilhon, a former French auto-racing journalist, who now goes by Rael and is the leader of the Raelian movement, a religion that believes life on earth was started by extraterrestrials. (Yes, really — although plenty of people who want to see women’s breasts de-eroticized aren’t motivated by UFOs).

The event is held annually on the Sunday closest to Aug. 26, Women’s Equality Day, which commemorates the certification of the 19th amendment, giving women the right to vote.

Gary said she grew up in France, where it isn’t a big deal for women to be topless in public areas, such as beaches. At French beaches, she said, children play right next to topless women, and nobody bats an eye.

“Why not in America?” she asked.

The Wiegands first became interested in the issue of equal topless rights while camping last summer.

“It was very warm last year, and we found that it was more comfortable for Marci to be topless up in the mountains,” Carl said. “And a lot of other people saw us up there and nobody ever really complained. And then we started thinking, well, why can’t we do this in town?”

Carl’s research led him to different groups and movements, such as Free the Nipple — an equal topless rights movement popularized by filmmaker Lina Esco’s 2014 documentary — and eventually to GoTopless.org. After showing Marci, she agreed the couple should stage their own Go Topless Day protest.

Many celebrities endorse the movement to allow women to go topless, such as Chrissy Teigen, Chelsea Handler and Scout Willis. Much of the controversy also stems from the perceived double standard on social media platforms; topless photos of men go unchallenged, while photos of topless women get removed.

It’s that double standard next month’s protest is designed to challenge. The Wiegands’ protest and one at Cal Anderson Park in Seattle are the only two scheduled for Washington state, according to GoTopless.org’s amusingly titled BoobMap. While Seattle hosted a topless protest last year, this will be the first one held in Bremerton.

Washington’s laws regarding women going topless are at least somewhat vague and ambiguous.

GoTopless.org has a map on its website showing each state’s “topless laws.” Washington is listed as orange, meaning it has “ambiguous state laws” on the matter:

GoTopless.org’s map showing each state’s topless laws. Green means “top freedom is in effect.” Orange means there are “amibiguous state laws on the matter.” Red means “the mere showing of the female breast in public is illegal according to state law.” (GoTopless.org)

In Washington, public nudity is covered by the state’s public indecency law, RCW 9A.88.010, which states that a person is guilty of indecent exposure if they make “any open and obscene exposure of his or her person or the person of another knowing that such conduct is likely to cause reasonable affront or alarm.” The law exempts breastfeeding.

In Washington state, a woman cannot be arrested simply for being topless in public, according to the Wiegands. For an arrest to occur, a member of the public must make a complaint and be willing to testify in court.

Police officers are exempt from being offended or alarmed by the sight of a woman’s breasts in public, the Wiegands said.

“They’re exempt from being offended or alarmed by seeing a nude body, because of their job description,” Carl said. “I had that confirmed by a lieutenant at the State Patrol and the Kitsap County Sheriff’s Office.”

“In other words,” chimes in Marci, “if I’m walking topless … they can arrest you if they want, but they can’t just arrest me with no complaints, because they’re bothered by it. They can’t be shocked by it.”

Granted, it may not take much for law enforcement to receive a complaint during a public, highly-visible topless protest.

The Wiegands consulted with an attorney before planning the protest, and he encouraged them to go forward with it, they said.

“He was just like, ‘Go have your protest and have fun,’” Carl said.

The attorney pointed them toward Miller v. California, a U.S. Supreme Court case in which the court developed a three-part test to determine obscenity. This includes applying community standards; whether sexual conduct or excretory functions are depicted in an “offensive way”; and whether the work or conduct, taken as a whole, “lacks serious literary, artistic, political, or scientific value.”

It’s that last prong that the Wiegands believe protects them from obscenity or indecency charges; because their event is a political protest, they believe it would be a stretch to argue the event doesn’t have “political” value.

“We could technically do this in the buff, because it’s a form of free speech and political protest,” Carl said. “There should be no difference between a woman being able to walk down the street without a shirt, when a guy can do it.”

However, Carl said when he contacted the Bremerton Police Department to inform them of the protest, a lieutenant told him he would arrest all the topless women, but not — without provocation — any topless men.

The couple is anticipating that police could arrest some people at August’s protest, but they don’t expect any of the charges to stick, Carl said. They stress that they’re only seeking participants who will follow the laws, eschewing obscene behavior and not blocking sidewalks or road traffic.

Scott Wilson of the Kitsap County Sheriff’s Office said his office is aware of the protest. The protest’s location straddles the line between the city of Bremerton and Kitsap County, and Wilson said if both agencies respond, only one will end up taking responsibility for the protest — probably the sheriff’s office, because it has jurisdiction anywhere in the county, he said.

People have a right to protest as long as it’s peaceful and not violent, he said. The sheriff’s office will monitor whether protesters engage in acts of public indecency, and will review the RCWs and county codes before responding, he said. In this case, he said he doesn’t believe there are first amendment protections that would allow women to be topless in public during the protest.

“We always like to get things done on a voluntary, compliance basis,” Wilson said. “There would be warnings issued, obviously: ‘Hey, you crossed the line from acceptable to unacceptable, so I’m going to ask you to cover up again,’ if that’s what it entails.”

“Back in the day, women couldn’t even have their legs uncovered. I think if they see it (topless women) more often, people will be less shocked by it.” — Marci Wiegand

If protesters don’t comply, the next step may include issuing an infraction or a court summons, or arresting protesters, Wilson said.

“I would hope not,” he said of the possibility of taking protesters to jail. “It doesn’t necessarily have to go that far ever, but who knows?”

And they’re ready for passersby who may not react kindly to the sight of topless women on the side of the road.

“We expect a lot of yelling and shouting, maybe somebody trying to throw water out of the window,” Carl said. “There’s some rude people out there that don’t want everybody to have equal rights.”

Carl argues that laws prohibiting women from being topless violate the 14th amendment to the U.S. Constitution, which contains the Equal Protection Clause. It states that no state shall deny citizens “the equal protection of the laws.” Laws can’t target a particular race under the amendment, so how can they target one gender? If a man can go out in public without a shirt on and not be charged with a crime, then a woman should be able to do the same, Carl said.

But even if the legal barriers were removed, how do you change a society that sees women’s breasts as inherently sexual and unacceptable for public view?

“Back in the day, women couldn’t even have their legs uncovered,” Marci said. “Over time, things develop. I think if they see it more often, like maybe if there’s regular protests, people will be less shocked by it.”

“It was just a little over 100 years ago that a woman could be arrested if she showed her ankle,” Carl added. “Back in the ’30s, even men had one-piece swimsuits. So it’s just getting used to it. It’s just like the transgender bathrooms. It’s something people are going to be used to. It was the same with gay marriage. There was a lot of uprising about that, but now it’s nationally acceptable.” Furthermore, it’s important to note that female breasts are sexual only as a secondary function; their primary function is to feed offspring, he said.

Marci said she has an answer prepared if people ask why she wants to be able to go topless.

“For me, basically, I really enjoy going topless on a hot day and men can do it, so I don’t think it’s right that I shouldn’t be able to do it,” she said.

Some women support the movement even though they wouldn’t go topless themselves, or don’t have the courage to do so.

Marci remembers running into a group of three teenage girls while she was hiking topless.

“One girl goes, ‘You’re my idol!’” she recalled. “And I was like, ‘Why am I your idol?’ And she goes, ‘Because you have the courage to walk around topless. I don’t have that courage.’ And she said, that’s what it really comes down to, is courage. A lot of people are just afraid of what other people will think or say. And that’s part of what Carl taught me, because I used to be that way. He says, ‘You have to go out the way you like to go out and don’t worry about what other people think.’”

The couple has informed local agencies of the protest, including law enforcement agencies, the city of Bremerton’s legal department, and the mayor’s office. They plan to inform all the businesses in the protest zone of what’s taking place.

“The lawyer told us that what we want to do is ‘take the shock away’ from the event as much as possible,” Marci said. “Because if you take the shock away, they’re not driving by not knowing it’s there. So then if they drive by anyway, you can argue that they aren’t bothered by it or they wouldn’t have driven by.”

It’s activists like the Wiegands, who are fighting for women’s topless rights at a grassroots level, that will ultimately make a difference, said Go Topless President Nadine Gary.

“It’s exactly what we need,” she said. “Our organization is grassroots … women all over the country are saying, ‘My breasts are not indecent.’”

The Wiegands plan to hold Go Topless protests annually, or until the state changes its laws to give women an unambiguous right to be topless in public — a development Carl said he doesn’t see happening any time soon. (Although, Washington was one of the first states to legalize recreational marijuana, so anything’s possible).

The location will change every year, getting the message out to different parts of the county.

The couple hopes that by making it an annual occurrence, people will get used to the sight of women’s breasts in a non-sexual context.

For more information on Bremerton’s Go Topless Day protest, visit the event’s Facebook page.
To contact the organizers of the event, email equaltoplessrights@gmail.com.