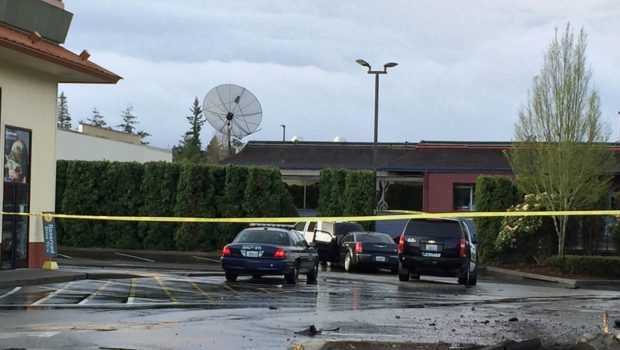 A North Kitsap man died Tuesday morning after he crashed at the Silverdale McDonald’s parking lot following a police chase.

Deputies from the Kitsap County Sheriff’s Office are investigating the collision, as detectives investigate the driver’s death, according to a press release from the sheriff’s office.

The crash occurred around 6 a.m. Tuesday at the Silverdale McDonald’s, located at 10444 Silverdale Way NW. The driver was identified as Victor Salvatore Schiavone III, 40.

The press release gives the following account of what happened:

Sheriff’s deputies were advised around 5:40 a.m. Tuesday that Poulsbo police officers were pursuing a vehicle heading southbound on Viking Way NW. A Poulsbo officer had reportedly initiated a traffic stop on a 2010 Chrysler 300 on suspicion of speeding. As the officer approached the car, the driver sped away.

The driver reportedly left Poulsbo city limits, heading southbound on Silverdale Way NW into the county’s jurisdiction. Pursuit speeds “fluctuated between moderate and fast, but were not excessive.”

A sergeant from the sheriff’s office deployed a vehicle “spike strip” on Silverdale Way NW, near the Highway 303 overpass, and it successfully deflated the Chrysler’s tires; the vehicle crashed in the parking lot of McDonald’s. As officers approached the vehicle, they saw that the driver had sustained an “extreme head injury” — reportedly the result of a self-inflicted gunshot wound.