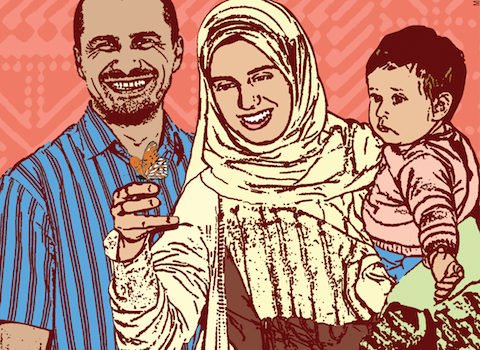 In recent years, groups that represent marginalized communities have given Mother’s Day a makeover. “Mamas Day” was started in 2011 as a way to celebrate moms who typically are left out of the “traditional” maternal depiction.

The Strong Families campaign of the social-justice group Forward Together began creating cards featuring queer mothers, single mothers, moms with trans children, and others not often seen on greeting cards or in the media.

“The types of images we see are fairly generic, and in their ‘generic-ness,’ they exclude so many of the families that are a part of our communities,” she says. “So, each year we commission artists to create original art that reflects the various ways that our mamas and our families look.”

This year, Stronger Together is delivering 15,000 cards to immigrant and Muslim families through grassroots organizations across the country, including the Muslim Association of Puget Sound in Redmond.

The cards are available online at mamasday.org.

There’s been an increase in hate crimes committed against Muslim communities over the past year.

Aneelah Afzali, who heads the Muslim Association of Puget Sound, says her mosque in Redmond was attacked twice in December – and she understands the power a card can have. After the attacks, she says community members left notes of support on the cars of mosque members.

“People underestimate how much of an impact that can make, but it really can be so powerful and profound,” she says. “We witnessed it, and I certainly observed it myself and experienced it myself with those cards that we received – even from strangers, or perhaps especially because it’s from strangers.”

Afzali says the Mamas Day cards are a beautiful gesture, but she hopes that after the special day has passed, people will still feel inspired to do more.

“I really hope people take it to the next level of actual action, to stand against Islamophobia and xenophobia, and racism in general, and antisemitism and homophobia – all of these kinds of other problems – and really stand for justice for all,” she adds.